A Look Back…to the Future?

Flashback to September 26, 1960, 70 million Americans witnessed a first in U.S. political history when the Presidential debate between John F. Kennedy and Richard Nixon aired on broadcast television. Prior to that point, the candidates for President had debated only on radio and political observers of that era spoke about JFK appearing calm, cool and collected and Nixon profusely sweating and looking generally uncomfortable. JFK was proclaimed the clear winner, yet those who chose to listen, rather than watch the debate said on content alone, Nixon was the clear victor.


Television had changed the face of politics seemingly forever. Flash forward to today and we see the face of not only politics, but of many layers of our society being forever altered by the internet and the way public perceptions are shaped and changed.


Enter self-described futurist Nicco Melle and his new book, The End of Big: How the Internet Makes David the New Goliath (St. Martin’s Press.) Mele posits that this new found “radical connectivity” has impacted business, politics, the media, education and many other facets of our life. For a futurist, Mele seems to spend an awful lot of time and ink looking in the rear view mirror. 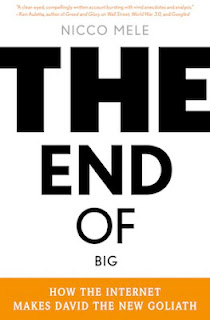 Mele’s credits as webmaster for the ill-fated Howard Dean presidential campaign, working with the Clinton Global Initiative, and being on faculty at the Harvard Kennedy School of Government coupled with a blurb from Howard “The Screamer” Dean had my antennae up looking for political bias. Mele tries to draw some interesting political parallels; including one between the so-called Arab Spring and the Tea Party movement. Mele praises the radical connectivity of the Arab spring movement, yet for the Tea Party…not so much. Certainly the Arab Spring has radically altered the landscape of the Middle East; whether or not it’s for the better, the jury is still out. Radical connectivity likely hasn’t quite figured out how to deal with radical extremists.


Malcolm Gladwell has created a wildly successful cottage industry out of using anecdotal evidence to make his case about what he think causes movements and business to reach the proverbial tipping point. I’m not quite sure that Mele’s anecdotal examples of the radical connectivity concept as a game changer is quite ready to leave the starting gate.
Posted by Jeff Johns at 9:24 AM