Inspired by reading David Ogilvy’s classic book Confessions of an Ad Man, I have been spending quite a bit of time lately delving into a combination of what I will call classic advertising and marketing books as well as some more recent titles that may soon find their way on to the must reads list.


Client service; it is a topic that can be a slippery and hard to wrap your arms around as a well-greased pig. You could ask ten seasoned professionals for their take and you’d like be met with a wide variety of takes and responses. Over the course of time there has been deemed one go to guide for delivering top flight client services; Robert Solomon’s The Art of Client Service. 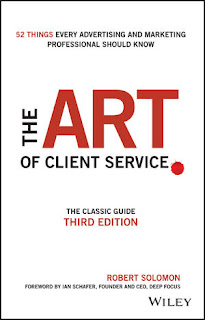 Solomon’s classic title has been updated and enhanced to account for the changing market dynamics of today’s advertising and marketing business landscape with the latest edition dubbed; The Art of Client Service: The Classic Guide, Update for Today’s Marketers and Advertisers.


As I have professed here before, I am a huge fan of books that provide actionable steps that you can put into play and model in your business directly. Needless to say, Solomon not only defines the process of client service, but delivers a road map for implementing or improving your process for client service. This is one of those indispensible books that you can turn to again and again for useful guidance.


There is just something about this guy…Gary Vaynerchuk or in this case Gary Vee has a palpable level of energy that you can’t help but swept up in as he imparts ideas, life lessons based on his experience and does it in a way that shows he doesn’t take himself too seriously.


His latest book, #AskGaryVee: One Entrpreneur’s Take on Leadership, Social Media and Self-Awareness, is a project spawned by his YouTube web show of the same name. Now you can certainly slog through the 150 plus episodes (average run time about 15-20 minutes) or you can take a more economical approach, time-wise, and pick up the book. It actually serves not only as a useful tool itself, but a guide to the web show, so you can check out the episodes you want to delve a little deeper into. I found myself dialing up the show, while I worked through the book. 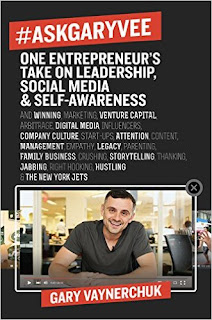 Living up to one of his own cornerstone tenants, “Be extraordinarily useful” Vaynerchuk serves up useful, step by step techniques that will make things happen and keep the ball moving forward. I am even willing to look past his shortcomings of being a Jets fan.


For years there has been a rallying cry that what we really need is a business man (or women) to be the President and run the country like a business; you know the kind of person who has signed checks on the front! Well we may be on the precipice of having just that happen this fall. But what if we reversed the roles and brought a dose of politics to business. I know what you’re thinking; there isn’t a business or workplace anywhere that doesn’t have the baggage of politics.


What I am talking about an what Scott Miller and David Morey write about in their new book The Leadership Campaign – 10 Political Strategies to Win at Your Career and Propel Your Business to Victory, is utilizing political campaign strategies, a campaign model to leadership and change leadership in particular. Miller and Morey brought their years of political experience to apple at the request of Steve Jobs and they built the “Campaign Model” which has been adapted for countless other businesses. 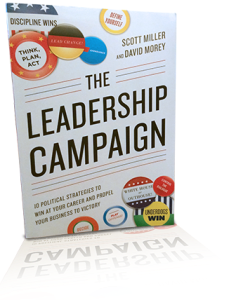 By breaking things into ten defined strategies or steps, Miller and Morey break things down into easily digestible and implementable chunks.


The 10 strategies are:
1. Decide to run – actually commit. Go all in.
2. Think, plan and act like an insurgent – Incumbents try to protect what is, Insurgents are all about change.
3. Build a Kitchen Cabinet – surround yourself with trusted, capable advisors.
4. Prepare your campaign, inside-out. Get the inner game figured out first.
5. Announce – Let everyone know your aim/goals
6. Define Everything –
7. Control the Dialogue – if you don’t someone else will
8. Gain momentum – momentum is king – others will get on the bandwagon.
9. Exploit Crisis
10. Leadership – learn and implement steps 1 – 9


It doesn’t matter if you work for a large corporation or if you are an entrepreneur the advice doled out here are things that you can start to put in place today and will help take you to the next level.


You Don’t Have to Be a Shark – Creating Your Own Success – Robert Herjavec (St. Martin’s Press)


A couple of years back bestselling author Daniel Pink delivered the book, To Sell is Human. Pink claimed that while about 1 in 9 people earn their living by selling; in reality everybody is selling something, even if it’s pitching a new idea to co-workers. Now Robert Herjavec, the so-called “nice Shark” from the runaway television hit Shark Tank, is out with his third book, You Don’t Have to Be a Shark – Creating Your Own Success, in which he offers insights into the secrets of effective and successful selling.


Not so much a bio, not so much a business book; You Don’t Have to Be a Shark, reveals some of Herjavec’s personal journey in an effort to put a human face on the techniques and advice he offers along the way and how you can put them into practice. 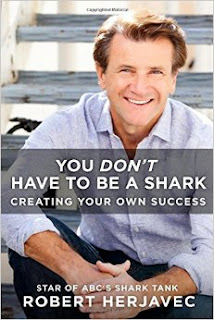 Again, practical and actionable are the watch words of the day here. While some of this stuff may come up as pretty basic and straight forward thinking; often Herjavecs best advice come in the form of how you can erase self-doubt and better focus your efforts and drive for success.


Quench Your Own Thirst: Business Lessons Learned Over a Beer or Two – Jim Koch (Flatiron Books)


Full disclosure upfront: I have been known to sip one or two of Mr. Koch’s fine beverages on occasion, but that quaffing played no role or influence in my thoughts about this book.


Jim Koch, the down to Earth, seemingly easy going guy who founded The Boston Beer Company, the brewer of Samuel Adams beers offers up his take on not only the story of the founding his company, which his really in the end, his story, but also serves up some practical advice for fellow travelers with and entrepreneurial streak in his book, Quench Your Own Thirst: Business Lessons Learned Over a Beer or Two. 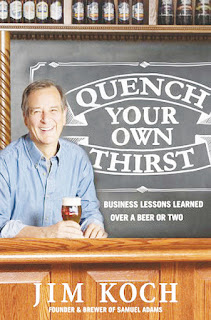 Koch is a pretty much what you see is what you get kind of guy and his storytelling style is described by the folks at Kirkus Reviews as “chatty” and to be honest I couldn’t come up with a better way to put it and it really works to describe the next door neighbor quality of his tale.


The underlying theme Koch carries through the book really brews down to how to turn your passion into your business and how to make your business great. Lots of folks have offered up their thoughts on how to get there from here and Koch makes a solid case and his success is a testament to the fact that if you focus on delivering quality products, whatever they may be, there is a track record of success that can be pointed to. My advice is more basic; pop a cold one and dive right into Koch’s story.


In its earliest days Technology, Entertainment, Design or as its better known TED Talks, catered to the nerd horde and served up the musings of little known, professorial types in a much more private environment. As TED Talks evolved they become a widely trafficked and massively successful vehicle for not only testing out or showcasing ideas, but actually having a major societal impact.


So, what is the secret to delivering a wildly successful, viral TED Talk that can’t motivate people to action? Well many folks have posited their theories and a number of books have hit the bestsellers list, but now for the first time there is a an official, TED sanctioned tome that will serve as a guidepost for delivering a successful TED or TED-like talk. 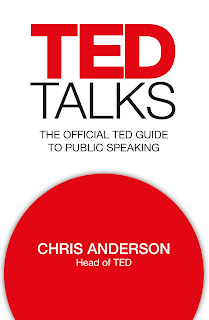 Chris Anderson, the man at the helm of TED, the organization’s curator offers up TED Talks: The Official TED Guide to Public Speaking. Anderson’s rallying cry is ‘ideas worth spreading” and the book will give you insights culled from his time overseeing TED. This is a true nuts and bolts approach to public speaking; offering up everything from topic development, presentation style, and even the basics of how to get comfortable with the idea of public speaking.


Anderson even offers his personal take on what it is that separates those TED presentations that blow up and get people not only watching but get them talking and telling their friends, and what falls flat. Too often when people take to public speaking they cannot overcome the urge to drop into a sales pitch; Anderson makes the case that you are there to give rather than receive, so save the pitch for the rebound, when people seek you out. All you need for solid evidence of the TED effect is to look at the folks who deliver viral performances that later delivered bestsellers. This one is a great tool to have handy as you build your content arsenal.