It doesn’t take a genius to figure out that when the Democrats in Congress passed the so-called Affordable Care Act (AKA - Obamacare) they sold the American people a bill of goods. The original bill topped out at over 2700 pages and since then the Obama administration has issued in excess of 20,000 pages of regulations to implement the clearly flawed plan.


Aside from all of the baloney about keeping your doctor and your plan and saving you money; the goal of some of those pages was an effort to improve the quality of the care delivered in the United States. While I won’t engage in an argument with idiots who think that Cuba’s health care delivery surpasses that available here in the States, as someone who’s day job is in health care, I will say that there is always room for improvement in the delivery of care. The problem is that the government and regulations are probably the worst possible vehicles for driving improvement.


In the time since Obamacare passed and was signed into law, there has been an ever shifting sands of rules and regulations that healthcare providers have been forced to address; each coming with a higher and higher price tag. Much of it boils down to additional reporting and paperwork and the manpower needed to handle it all. One unfortunate side effect is that health care providers have tried to maintain costs and larded this mountain of additional work on existing staff, which drags down their ability to actually provide care. 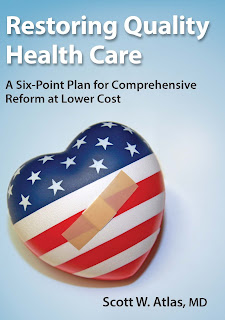 As if to illustrate my point about the government being the worst vehicle to drive up quality, Scott Atlas, M.D., a Senior Fellow at Stanford University’s Hoover Institution and a member of Hoover Institution’s Working Group on Health Care Policy, has served up the new book, Restoring Quality Health Care – A Six-Point Plan for Comprehensive Reform at Lower Cost. Minus the end notes and index, Dr. Atlas managed to offer up a concise and comprehensive reform plan in an easily read 99 pages.


Many of Dr. Atlas’s suggested reforms involve the streamlining of processes; process improvement is one of the cornerstones and goals of any strong health care provider, so it would make sense that a physician would bring this approach to the table. Process improvement…not a government bureaucrat’s long suit.


Dr. Atlas also suggests injecting market based reforms into the health care process, including the expansion of and incentivizing of Health Saving Accounts (HSA) for all Americans. Atlas even goes so far to suggest that HSAs be issued at birth like Social Security numbers. By beginning the process early, incentivizing people to contribute to the accounts through tax breaks, making the HSA portable, and allowing these account to pass to family members without taxation upon a patient’s passing, a deeper level of understanding and control over health care spending would become ingrained in a society. This is a clear market force that would drive up quality.


Dr. Atlas also explodes the myth of Medicare excellence. He describes Medicare as being “a disjointed and antiquated system designed for decades long passed.” Again he offers a common sense reform for streamlining the bulky, bloated and confusing systems of Parts A, B, and D which only serve to increase administrative costs and baffle the seniors the plan was designed to aide. As Atlas points out in the book, the cherry on top of this mess is the plan fact that the Medicare system is in dire financial straits.


While the government tried to “fix” health care with a lumbering, bloated, Goliath of a plan, Atlas choose to go the route of David and offer up a quick, nimble plan to reform and improve the quality of health care we all receive.