The branding masters at Nike famously coined the term Just Do It! to sell their iconic athletic gear. The message left unsaid was to get up off the couch and get to it already.


It is with a similar thrust that David Newman exhorts business owners and marketers to get on with it when it comes to marketing their goods and services in his new book Do It! Marketing. While strategy and planning certainly are a major part of marketing for any business, there is a tendency to get bogged down in the planning stage and never getting off the dime when it comes to execution. 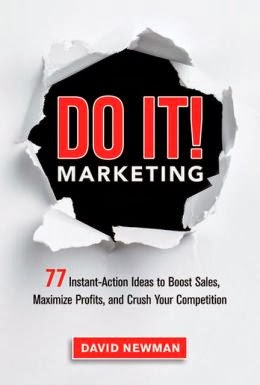 In the book, Newman teaches a bias towards action; by offering practical steps that any business should be able to put into action immediately. I think he hits on a real cornerstone on which to build when he talks about the starting point for any business should be knowing very clearly who you are! It’s amazing the number of businesses owners I have talked with about their marketing who can’t manage to clearly define who they are, what their business is and what their goals are.


That thought process once defined and in place should according to Newman lead to what really boil down to a set of simple decisions and tactical steps to implement and reach a higher level of success. Newman provides 77 executable actions steps that can be put into play today.


Like any long laundry list of ideas, the decision making process should not hinder taking action; again the bias is to action. Clearly you won’t fire up all 77 tactics at once, or in many cases at all; the idea is to pick those tactics that work best for your situation and get cracking. Anything worth doing, is worth measuring; check the results, tweak the actions to improve or continue the results then move on to the next action step.


Like Newman says, “ small business marketing is not a mystery” it’s about making a decision to just do it!

Email ThisBlogThis!Share to TwitterShare to FacebookShare to Pinterest
Labels: David Newman, Do It! Marketing, Just Do It!, Nike


I remember very clearly the time I took something called the World’s Smallest Political Quiz. Ten questions total; five on personal issues and five on economic issues. Answering the questions online, I was taken to a graph that was divided into quadrants and that dropped me firmly into the heart of the libertarian section. For a person who believes in freedom, personal responsibility and small government it made perfect sense to me.


It also made perfect sense that I was drawn to then Texas Congressman, Ron Paul. I had the opportunity to interview Paul in the days before he ran for President and found his thoughts on limited government lined up well with my own. Paul is an accomplished, bestselling author and in this new effort, The School Revolution: A New Answer for Our Broken Education System he offers up his fix for the failing public U.S. education system. 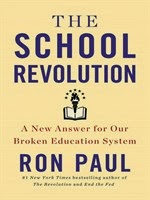 Paul writes with a very matter-of-fact style as he dissects the current state of the centralized education system. Along the way Paul delivers a historical take on things through the lens of his own education. He also indicts the system we are saddled with for funding the education system. He posits the solution that we must somehow put the funding of education back into the hands of parents as educational decision makers.


I can hear the unholy howls of public education advocates and teachers union types in response to Paul’s “answer.” Like anything else, including healthcare, I favor putting the decision making power back into the hands of the individual. I am not certain that we could ever effectuate the wholesale change that Paul advocates. In this day and age of social engineering of liberals that has lead to the destruction of the family unit I can’t imagine what the country would look like if every so-called parent; just because you’ve been part of the process of having a child, doesn’t make you a parent, were to determine the education process for their children.


It does however make perfect sense that those parents who are capable of making educational decisions on behalf of their offspring, should be afforded the opportunity to opt out of the government education system and take their dollars with them to the alternative choices they make. This simple step will inject competition into the education system. Where there is competition, it naturally follows, there is the pursuit of excellence and higher standards. If the government schools improve, they can compete on equal footing for parent’s education dollars.


Despite agreeing with Congressman Paul on the personal freedom side, I could never bring myself to support his presidential runs, because his supposed support for smaller government rang hollow when he larded his districts pork barrel projects into house spending bills and sought cover by voting against bills that he knew would pass. In similar fashion, Paul uses this book to not only offer up an education solution, but to hawk his online education curriculum. While I am a capitalist and completely understand Paul’s goals, there’s just something a bit smarmy about the approach.
Posted by Jeff Johns at 10:42 AM No comments:

My answer was simple: Writing.


I remember being asked to speak to my cousin’s 8th Grade class on career day. I was working as a radio disc jockey at the time and she wanted to have various friends and family members speak to the kids about how to choose a career path and what tools you would need to develop to be successful. Naturally all the kids thought it was “cool” to be a DJ and wanted to know what was the most important ability to have to be successful.
My answer then, remains the same today; writing. Now the 8th graders where a little surprised, but anyone in business probably wouldn’t be shocked by that answer. The ability to communicate effectively by written word is easily one the greatest skills/needs in today’s business world.

If you play a role in the hiring process, you probably also know that it is one of the skills that is clearly under-developed, if not darn near dead. I can’t believe the number of cover letters/resumes that I see on a weekly basis that I am tempted to take a red pen to and send back to the applicant. While the advent of technology has certainly added speed to the written communication form, it has also been detrimental to developing writing skill. 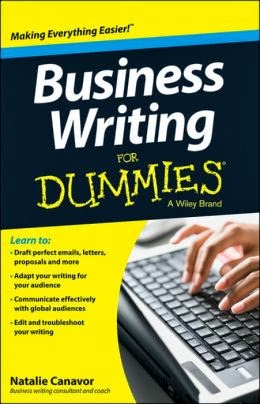 The folks at For Dummies books are out with an updated edition of Business Writing for Dummies by business writing consultant and coach, Natalie Canavor. This nifty little volume covers a vast array writing types including; proposals, e-mails, letters, and executive reports, among many others.


This book is perfect for any level of workplace experience, because Canavor offers up great tips to take the experienced business writer to the next level while giving newbies at great starting point. I would highly recommend this for parents with kids in college or soon to be graduating to the workforce; writing is an ability that will set your child apart from rest of the pack.
Canavor say it all very early in the book with a section entitled; “Make writing your not-so-secret weapon.” I am firmly convinced that my ability to write has set me apart from the pack and allowed me to smoothly transition through a variety of career paths where the ability to put words on paper effectively is critical.


The ability to write does not come easy; it takes time, hard work and plenty of practice to hone the craft. Business Writing for Dummies is an extremely useful tool to have on your business bookshelf and refer to often.
Posted by Jeff Johns at 11:26 AM No comments: